I’m mostly settled from jet-setting across the country and, more recently, across the state. True to form, I realized what I’d forgotten to pack when I was about 80 miles into the drive Friday night. But, that doesn’t even come close to the Hell I went through on my trip to San Fran …

Issue 1: Late take-off on first flight: Because of the notorious South Florida weather, my flight to Miami was delayed by 90 minutes (which we suffered through onboard, at the gate). Why I had to go through Miami to get to San Francisco, I’ll never know.

Issues 2 and 2.5: Missed connection, new connection delayed: The setback for planes leaving MIA didn’t last long enough for me to exit the first flight and make it to my connection on time. I literally watched my connection take off from my OG plane. After re-booking, the new flight was delayed by a little over an hour.

Issue 3: Seat double-booked: After boarding the new connection, a woman was in my assigned seat. She assured me she’d been given that seat assignment, and I asked a flight attendant to reassign mine … I even said I’d sit in the bathroom if it meant I could stay on that flight. Luckily, no lavatory — a window seat opened up for moi.

Issue 4: Luggage left in Miami: Arriving just after 1 a.m. PST, I was exhausted and ready to get into my PJ’s. My luggage was nowhere to be found, though, and baggage control assured me I’d have my stuff by noon the next day (more like 10 p.m., but close enough). The complimentary toiletries totally made up for not having fresh clothes. Or functional deodorant.

Now, I’ve flown internationally and regularly enough to know that by law of averages, not every flight will go off without a hitch. That’s impossible. What I didn’t realize, however, was that so many things could go wrong in one day. What was supposed to be a seven-hour journey turned into a 16-hour adventure.

But, it was all worth it. How could I stay mad, when this is what I got to see all week?:

AT&T Park, home of the Giants. 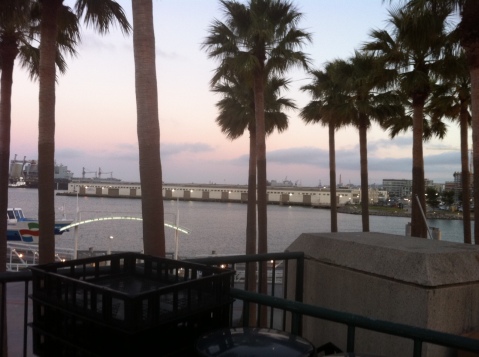 A local cathedral … apologies for the blurriness (it was windy, natch).

I have a love affair with landmarks like Golden Gate. Just ask my ex, Big Ben. 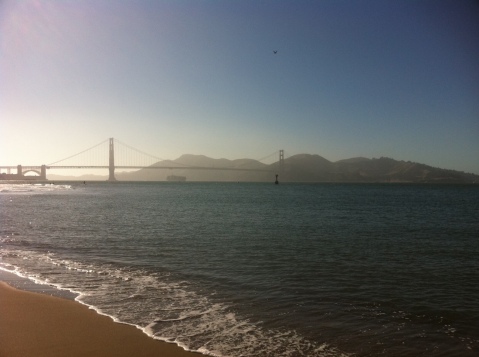 I could never stay mad at a view like that.

Freezing cold water, but my toes will forgive me.