By 30, you should have…
6. A past juicy enough that you’re looking forward to retelling it in your old age.

Ayana Byrd began this week’s chapter describing her affinity for staying safe in the middle, never veering too far from the center to make waves.

I didn’t immediately relate. I’ve often considered myself somewhat of a rebel — or at least the black sheep — of my family. After all, I’m the only one who has a facial piercing (my nose, but it counts)! I’m the only one of my generation (until very recently) to get a tattoo — and at that, I have multiple. The horror! I’m the only one who left Florida to pursue a life beyond the Sunshine State.

This is where Ayana and I connect. She detailed her many adventures abroad, feeling limitless as she ventured far beyond the comfort zone of the middle.

It’s always surprised me when someone compliments me on my own big moves. I haven’t given them all that much thought, until now.

New York and San Francisco are largely made up of transplants. Sure, you have your lifers, the people who are quick to remind you they were born and raised there, and will call you out for any embarrassing transplant behavior. But by and large, there are tons of people in both places who’ve moved into these cities for the pursuit of something more. And probably because of that, I haven’t felt like my leaving Florida was all that big a deal. Plenty of people do it. Heck, lots of my colleagues have traveled much further — and risked much more — to come here.

But I shouldn’t lessen its importance, or how much those moves have changed me. Compared to my colleagues and friends, and yes, Ayana Byrd, I’ve done a paltry amount of traveling abroad. But aside from family who served in the Armed Forces, I’ve got the most stamps on my passport.

And without even leaving my zip code, I can see the world in a much more diverse way — challenging the status quo constantly — because I live and breathe in a city that pushes for progress and change.

I’ve had the privilege of learning about more cultures and backgrounds in four years away than I had in the 25 years prior. I’ve experimented with foreign (to me) ingredients, entertainment, customs and traditions. I’ve broadened my perspective on what an impact a life well-traveled can mean. I even spent seven weeks of the last year traveling — albeit, all domestic — because I can always find a reason to say “Yes” to a new experience.

Ayana’s story reminds me there’s so much to say “Yes” to, beyond the 50 states and how it’s OK to be a little scared the first (or every) time you venture somewhere new. Of all my wild and crazy antics, I’ll happily share a full passport and broader understanding of our world for years to come. 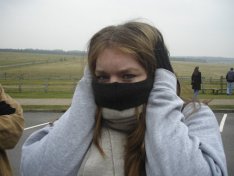