I spent the bulk of June cheering on my brother’s fitness progress and not doing a whole lot toward my own. I’ve fallen out of routines, de-prioritized healthy habits, and generally made excuses for my lack of motivation. For the first time probably ever, though, I’m not completely beating myself up for it. [Negative thoughts squashed: ~20]

While I still have a hard time abandoning books I don’t love, I did evolve a bit into trying shorter stories and more memoirs. I did my best to like some titles, but there were only a few standouts from the nine I consumed in June. [Books read: 9]

Weather be damned, here’s the rest of my June un-gloomed: 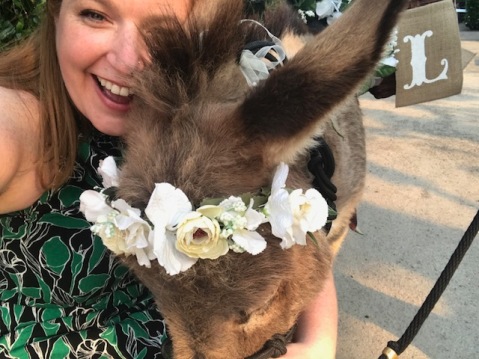 This is my new bff, Zoe. She’s a little camera-shy.

Am I still blowing out birthday candles? Yes. Am I mad about it? No. 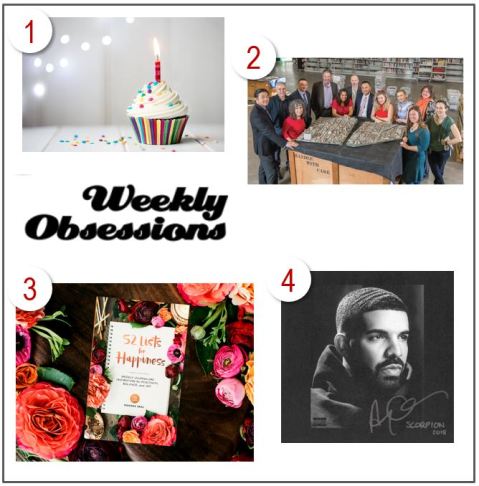 It’s nearly 6pm PT on this hellish Hump Day and I’d like to say I have four things to share with you. Operative word being “like” … but sadly, that’s not the case.

Between the emotions of Father’s Day, my parents’ anniversary, a work trip in Sacramento, a friend’s wedding in NYC and the dumpster fire that is the immigration debate, I just don’t have it in me this week.

And since I’m working really, really hard on self-care, I’m not pushing myself to do it. I would apologize, but that’s also part of learning self-care.

So instead, please take the 10(?) minutes you’d spend reading my WO to do a meditation, journal, call a friend, make a playlist, read, or whatever you do to take care of yourself.

Consider it my gift to you, friends.

By 30, you should have…
12. Something ridiculously expensive that you bought for yourself, just because you deserve it.

Allow me to begin by saying: I’m not the type who thinks I “deserve” expensive things. I’m a commitment-phobe, a bargain hunter, relatively low maintenance, and I’d rather treat myself to a car service over the course of the month than spend the same amount on a purse or pair of shoes.

That’s not to say I’m frugal — I’ve splurged on travel and gifts for others, often finding more value in experiences than material things. I consider gym classes the best long-term investments money can buy. I’m a big fan of “throwing money at the problem” when it solves everyday inconveniences (hello, Blue Apron and Instacart).

Part of why I bought it was this week’s challenge — yet another timely sign from above that I should just do it.

And the other part of why I bought it was because I do “deserve” it after the morning I had.

I was dogsitting over the long weekend for a good friend, but her flight was delayed last night and she wouldn’t arrive to retrieve her keys until 245am. Knowing I’d signed up for a 715am gym class, we agreed she would call me when she got close to my place and we’d make the key swap.

Easy peasy. So far, so good. All of the clichés.

I got up on time again at 615am, despite struggling to fall back asleep; and I was so proud of myself for getting my clothes, lunch, laptop and all other things in order. I was heading out on schedule, just in time to make the bus!

As I closed the door behind me, I realized a beat too late that I failed to grab my keys along with my two overstuffed bags. I’d locked myself out, for the first time (I think?) in my 12 years of living away from home.

Luckily, my landlord is local and able to meet me tonight to let me back in (before I head back out to my dinner plans, but at least I’ll be free to come and go again).

So, I made it to my first-ever barre class the same morning I had my first-ever lockout. Enter, the west elm Sivas Wool Kilim Rug in Macaroon Pink: 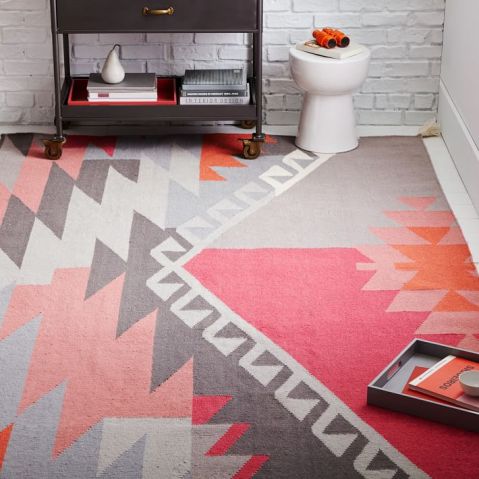 I’ve had my eye on this rug for more than a year… seriously. It’s become a joke with certain friends, who plead with me to either buy the damn thing or stop lusting after it.

I even set an alarm to make sure I grabbed it while it was on sale for Black Friday, only to forget all six years of corporate retail knowledge and miss out on the actual sale — on Cyber Monday. It was sold out, and my dreams died again.

So here we are, three months later, and I finally pulled the trigger to purchase this rug. Because it was on sale. And I had a coupon. And I had a shit morning. But also, because I deserve it.

We’ve already made it through a month of 2017, people! Can you believe it?!

I sure can’t, because these past four weeks have been so mentally and emotionally exhausting, I thought we were at least through May. My calendar still says “February 1,” so I’ll have to take its word.

I’m sure you guys are still coming down from the high of yesterday’s whirlwind Wittyburg jamboree. Amirite? Not to worry, there’s still plenty to celebrate today!

I’m Basically the CEO of Awesome

We’ve been working on a high-priority project, and I’m naturally rocking it like a hurricane. My Creative Director needed copy for a mock-up of different sales we offer, including one with the (fake) promo code TREAT.

It’s been weeks, and I still say it like they’ve never heard it before.
Because it’s hilarious.
And you gotta celebrate small victories in the workplace.

At least I’m not getting kicked out of the MTV Movie Awards for these antics, right?